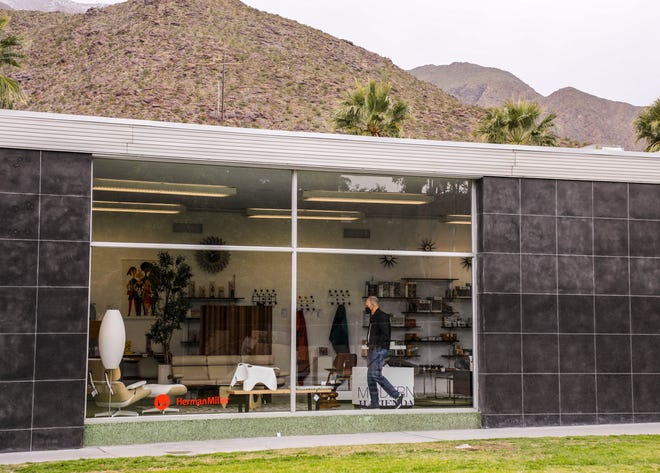 The long-running effort to revitalize Downtown Palm Spring’s iconic Town & Country Center is bearing more fruit with the renovation of one of the resort’s modernist treasures.

Last week, a temporary furniture store at Modern Hacienda in Palm Desert became the first business to open in the building in more than a decade.

Added to the complex in 1955, the EF Hutton Building (also sometimes referred to as the Wexler & Harrison Architects Building) is noted for its terrazzo floor and facade.

Palm Springs Preservation Foundation President Gary Johns said the building’s unique look is the result of its architects, Donald Wexler, researching innovative materials that would stand the test of time.

The building faces the courtyard of the Town & Country Center, a complex of several modernist buildings designed by renowned architects located on the northern half of the block bounded by Indian Canyon Drive, East Andreas Road, Palm Canyon Drive. It is also the only one-story building in the complex.

Despite its significance as a contributing structure to one of Palm Springs’ longstanding architectural gems, the building has long been vacant. Johns said he didn’t know how long the site had been vacant, but said it had been at least 11 years and he would put it closer to 20 years.

The building sat in limbo for several years as owner Wessman Holdings spent more than a decade trying to push through a series of controversial and ultimately unsuccessful proposals to redevelop the center.

More than once, these proposals called for the complete demolition of the building. But in 2020 the city approved a plan by Grit Development (the new name for Wessman Holdings) to restore and modernize the center which would involve renovating the EF Hutton building to hopefully attract a new tenant.

Less than two years later, these renovations are complete and the building has its first tenant.

Focusing on furniture and other classic-modern design products from design firms Herman-Miller and Knoll, the Modern Hacienda pop-up store is set to coincide with Modernism Week and runs through February 27. The store is open at 168 North Palm Canyon Drive from 9:30 a.m. to 6:30 p.m. daily.

Modern Hacienda owner Lawrence Lazzaro said he was happy his store could be the first tenant to open in the space after several years.

“It’s a beautiful, elegant space,” he said, noting that the style of the building is a perfect match for Modern Hacienda’s products.

The renovation process took six months from planning to completion, said Grit Development President Michael Braun. During this time, the glass was replaced while the original terrazzo was sanded and polished to restore its shine.

Johns, who has advocated for the restoration of the Town and Country Center for years, said he was impressed with the renovation. On Thursday, he gave a lecture as part of Modernism Week focusing on the value of the building and its renovation.

“I had lots of before photos of interior water damage and deteriorated exterior, then I documented the restoration,” he said. “I call it a beacon of hope for the restoration of the rest of the center.”

More work to do

In 2020, the Palm Springs Architectural Advisory Board gave approval for the start of work on the first phase of the Town & Country Center renovations, which focused primarily on giving the exterior of the buildings facing Palm a new look. Canyon Drive. So far, Johns has been pleased with the progress, although it’s clear there’s still a lot of work to be done on the rest of the center away from Palm Canyon Drive.

“The Town & County Center’s Palm Canyon facade is pretty much repainted, freshened up, looks great,” Johns said. “Is it restored? I can’t say, but it looks good and the best face in the center is on Palm Canyon Drive.”

Johns said he hopes these improvements, combined with what he described as the complete renovation of the EF Hutton building, will encourage tenants to move into the complex and encourage Braun to continue repairing the rest of the center.

Braun told The Desert Sun that much of the center is now fully rented, with the major exceptions of the EF Hutton building and the old Town and County restaurant building (which was more recently Zelda’s nightclub), a large two-story structure overlooking Indian Canyon Drive. .

He said the space is actively available to rent for retail, restaurant, bar, nightclub or office uses.

The EF Hutton building, meanwhile, is available to rent from March 10, with the space considered suitable for temporary activations or a long-term lease. Potential uses include retail, cafe or offices. Lazzaro said while he and his team love the space, they haven’t had any conversations about long-term leasing.

Among those also excited about the space is Destination PSP owner Jeffrey Bernstein, whose store is located near the building.

“With what they’ve done with this building, it’s just a really big step forward,” Bernstein said. “The way all of downtown comes together is really exciting to see.”

Braun, meanwhile, said he was thrilled for residents to come out and check out the building, which he called a special part of Palm Springs heritage.

“Let it represent the past in our experience of the present and be a beacon for our future as we create and live in our shared environments in harmony and civility,” he said.

Paul Albani-Burgio covers breaking news and the city of Palm Springs. Follow him on Twitter at @albaniburgiop and by email at [email protected]