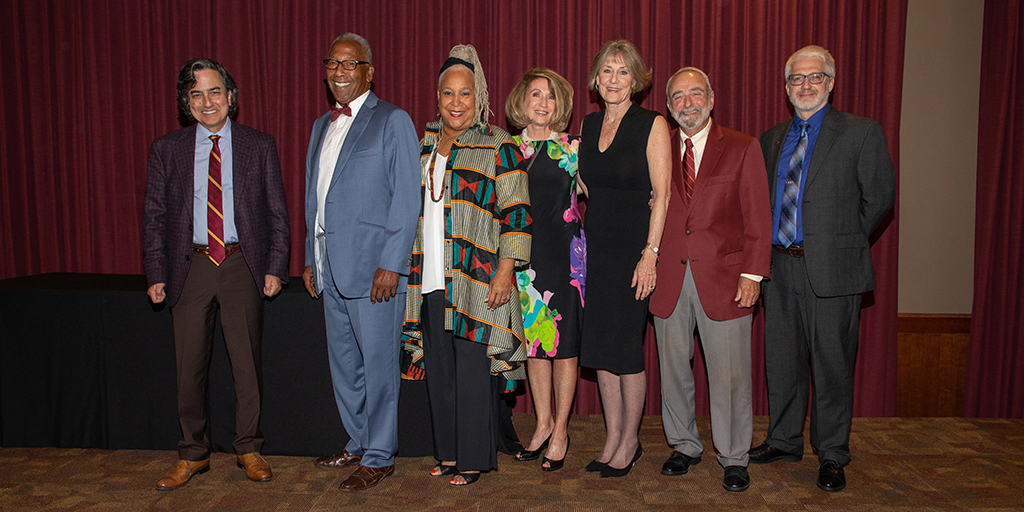 The Florida State University Faculty Senate honored members of the university community with Torch Awards for their commitment to academic excellence during a March 3 ceremony at the State Conference Center of Florida Augustus B. Turnbull III.

The 2021 and 2020 Torch Prize winners were recognized at the ceremony.

Named after the torches depicted in the university seal, the three categories of Torch Awards are: Vires, embodying moral, physical, and intellectual strength; Artes, expressing an appreciation of the aesthetics and beauty of intellectual pursuits; and Mores, showing respect for customs, character and tradition.

For nearly 30 years, Greg Beaumont has dedicated his career to helping FSU students achieve the highest academic standards and excel in their personal endeavors.

After earning her MA and PhD in English at FSU, Beaumont touched the lives of many students over the years and honored the university with its commitment to high academic standards and a reliable work ethic. A longtime instructor in the English department and associate dean of undergraduate studies, Beaumont has dedicated his time and effort to his students and their families.

Following his appointment as Senior Associate Athletic Director in 2013, Beaumont improved the quality and standards of the athletic program while providing academic support to over 500 athletes. During his tenure, an unprecedented number of student-athletes were named to the ACC Academic Honor Roll, and in 2018 the overall GPA of all student-athletes exceeded 3.0 for the first times. He also supported student-athletes in their sporting pursuits by participating in as many sporting events as possible.

Beaumont has also dedicated his time to serving on several committees and advisory boards, including the Garnet and Gold Scholars Society, Sigma Phi Epsilon, and the Phi Kappa Phi Honor Society.

As FSU’s first lady from 2003 to 2010, Virginia (Ginger) Wetherell Scott used her unique, aesthetic eye to direct the construction plans for the college president’s house – affectionately dubbed “the house that Ginger has built”.

When Wetherell Scott took on the project, she understood the importance of creating a building that embraced the spirit and tradition of FSU. After raising funds to build the house, she selected the architect and contractor and worked as the project manager for over two years.

Wetherell Scott enlisted several FSU entities to perfect the interior design, including the Master Craftsman Studio to make handcrafted moldings and the Museum of Fine Arts and The Ringling for selections from their art collections. She also scoured the campus basements for antiques, furniture, and memorabilia, which add to the aesthetics of the house and help preserve FSU’s rich history.

Wetherell Scott’s perseverance and commitment to building the President’s House went far beyond that of a project manager. She not only helped find the right furniture, crockery, cutlery and decorative pieces, but she also helped paint the interior to keep the project on track and laid bricks to enhance the beauty of the house.

A former member of the Florida House of Representatives and Secretary of the Florida Department of Environmental Protection, Wetherell Scott has shown true passion and commitment to the construction of the President’s House. Since its completion in 2007, the house has served as a pillar in the FSU community and a symbol of FSU’s historical and physical distinction.

Celebrated as one of FSU’s most notable and honorable football players, Warrick Dunn has represented FSU athletics in its greatest light since graduating in 1997.

As an undergraduate student at FSU, Dunn never wavered in his commitment to his coach, Bobby Bowden, or his academic endeavors. Known for always studying in his dorm called the “library,” Dunn personified the dedication and commitment of a responsible college student-athlete. Following his selection by the Tampa Bay Buccaneers in the first round of the 1997 NFL Draft, Dunn established Warrick Dunn Charities, a foundation focused on helping and empowering low-income families.

Inspired by his own upbringing, Dunn founded the Homes for the Holidays program, which provides single-parent families with furniture and down payment assistance. Over 180 families have received housing since the program began in 1997.

The Dunn Foundation also runs the Hearts for Community Service program, which provides college scholarships to active community volunteers, Count Your Future, a free program that teaches financial literacy, and Sculpt, a program that provides information on lifestyles. healthy lifestyles. Dunn has donated over $1 million through these charitable programs.

Dunn demonstrated true dignity and empathy for those in need, making it his mission to help others achieve their goals and aspirations. Above all, Dunn has remained a monumental figure at FSU and serves as an inspiration to other student-athletes who are passionate about their sport and their community.